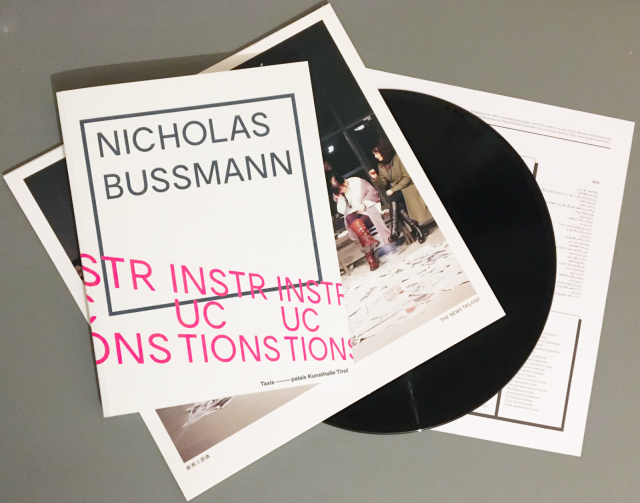 In the beginning there was an instruction,
initiating a moment of play which took the form of a book;
a book that emerged out of a solo exhibition held by Nicholas Bussmann
at the TAXISPALAIS Kunsthalle Tirol.
Several games and ‘plays’ were staged in the exhibition,
where repetitions of repetitions
were repeated
again
and then again.
How can the practice of the artist be translated into the form of a book?
Bussmann answered this question by incorporating his generative model
of programmatic instructions into the book itself.
The elements that typically form Bussmann’s games remain at play here.
The reiteration of world-building, as with the sung news or the series of iterative texts
in an artist book, let flash in their collision the idea of a bigger picture—
not yet drawn, uncannily complex and heterotopic,
but nonetheless a powerful stance for imaginative action.
(excerpt Epilogue by Nina Tabassomi)
with texts by:
Vinit Agarwal, Lindy Annis, Garnette Cadogan, Philippe Cerf, jee chan,
Yun-han Chang,Jo-hsin Chen, Freya Chou, Communist Lost Soul Capital O,
Damien Desamory, Franz Friedrich, Michael Guggenheim, Karin Harrasser, Stefan Heidenreich,
Hannah Hurtzig, Yan Jun, Alexander Klose, NaP, Natascha Sadr Haghighian,
Els Silvrants-Barclay, Nina Tabassomi and Tim Tetzner.
Nicholas Bussmann Instructions
120 pages
TAXISPALAIS Kunsthalle Tirol & Verlag für Moderne Kunst
Nicholas Bussmann
The News Trilogy / Revolutions Songs in an AI Environment
LP inklusive digital download
subjam China
T–p records Austria
Taxispalais offers  a winter special package of the Book & LP 30€  here!
or via bandcamp where you can also listen to the music.
for China (PRC) please order via subjam’s bandcamp

The truth, through the eyes of economists worldwide, is that of an incremental advantage: a signal relative to a noise. Deng Xiaoping’s famous: 让⼀部分⼈先富起来 “let a few be rich first” marks the end of an absolute truth based on ideology for China, and ultimately, the global hegemony of the concept of the sufficient truth of statistics, the relevant signal: The culture of advantage.

This relative truth only exists against a backdrop of noise; but can noise itself be displayed? Noise, it seems, is only exhibited within an environment subject to a strict hygiene regime, a space cleaned to the utmost. However, noise is no longer presented; only the frame, the white wall remains. The noise has been domesticated, it has become a defined signal. Similarly, nobody has ever heard the silence of John Cage’s 4:33. It is a situation where an interpreter merely executes a composer’s algorithm/composition in a concert hall with an audience strictly seated, not daring to move, cough or speak. With two nights of concerts, the Shanghai Biennale extends the thematic exhibition “Social Factory” to reflect on noise as a continuous process, an uncatchable, slippery, undefined in-between – the uncertain potential of society.

on Sunday 14:00 -17:00 is a workshop with the performers of the Shanghai News Blues open for all amateur singers to learn how to sing the news. The workshop is admission free.

As a child, it must have been in Berlin, I made up a game in a moment of boredom. A game with a self imposed task that nearly every child is familiar with: “You can only tread on the paving stones, if you tread on one of the cracks between the slabs then you have lost and will be eaten up by a crocodile.” It is a little algorithm, a set of instructions for solving a problem. The problem is boredom, the algorithm recognises right and wrong, zero and one, paving stone or crack. The algorithm intensifies one’s experience of the present by organising the future. By completing the specified task I solve my problem: boredom. I relished the threat of the imagined punishment more than an imaginary reward, especially as I was certain that I would never be eaten by a crocodile, i.e. not receive a reward – after all I had thought it up myself. The algorithm extends a clearly delineated path into the future before me, which I only need to follow, laying out problems in front of me like the beads of a rosary. It organises the world of play in clear signals. If I become sick of the game I only need to jettison the structure, leap in the air and enjoy the moment of liberation from my self-created structure. – Recalling this childish, naive oscillation between self-imposed law and lawless freedom helps me to assert my autonomy, today, at a time when these algorithms have long since gained their independence and, seemingly godlike, establish facts and organise our future in the Internet.

It is still possible to recognise this emerging world as synthetic, resembling as it does the graphics in old computer games where the landscape rears up in front of us outlined in rough polygons, demanding considerable fantasy to transform the green triangles into hills and view them perspectively. – Today it is still possible to recognise advertising as advertising, but sometimes we have a feeling of déjà vu when we find precisely what we believe we are looking for. In the future we will only experience what we believe we desire. In the future an invisible hand will be extended to us from the invisible advertising banner, an eagerly awaited sign of promise in a moment of extreme receptivity.

This world is based on a new idea of truth, for which the statistical, harmonic mean suffices – a sufficient truth. In a parallel process personal experience becomes the logical result of a behavioural pattern, momentary experience becomes a predictable action, for example the purchase of a TV sofa, which ultimately serves the fulfilment of a personalised, constructed task: following orders rather than choosing. Capitalism will also come to an end as a result.

If one considers how comprehensively our movements are calculated in advance in order to organise them into an exploitable harmony then one is confronted with the idea that what is being composed here is a music of the spheres. Pythagoras, a European contemporary of Buddha, Lao-tse and Confucius and the founder of the mathematical analysis of music, used this term to describe an inaudible music of the cosmos. The accord of the heavenly bodies resonating in their orbits, revealed to us humans in the numerical world of music. Even the vocabulary of the constructors of this modern music of the spheres, the statisticians, programmers and advertising psychologists, is rich in musical terms. Noise, the harmonic mean, rhythm, signal and dynamic for example. Clearly they are using the same tools as those we employ as musicians and composers, albeit with a completely different motive.

For myself as a music maker this means that my music is bound to interact with this new world, whether I want it to or not, due to the fundamental structural affinities. As a consequence, composers now enjoy basic social prerequisites which the avant-garde of the last century could only dream of. Free of ideological ballast we can transpose and permute the numbers, design alternative algorithms, or with a joyful sense of destruction, noisily waste our youth, muddling the signal-to-noise ratio of the statisticians in participation mysthique. We musicians are the black swans of this new world, we hold the trump card – we can be very quiet, and still be heard.